The Miners formed a bullish reversal on Tuesday.

After the big 4.88% rally on Monday, it is not surprising to see a pullback on Tuesday.

Monday’s rally saw the Miners breakout above the 39 resistance level. Tuesday’s bullish reversal backtested that level. This level should now act as support which can be used as a stop.

The dollar lost the 92 support level on Tuesday.

Tuesday was day 32 for the daily dollar cycle. That places the dollar in its timing band for a daily cycle low. Since the dollar broke below the 92 support level, then next obvious level of support for a DCL is the rising 50 day MA.

The dollar is in the advancing phase of its intermediate cycle. With the dollar being in its timing band for a DCL, the 50 day MA should be able to provide support for the dollar to form a DCL. If the 50 day MA fails to provide support for the DCL, that would indicate that something more sinister is afoot with the intermediate cycle. Which is what I plan to cover in the Weekend Report.

Gold is being squeezed by the declining 50 day MA and the rising 200 day MA.

Gold printed its lowest point on day 33, placing it in its timing band for a daily cycle low. Gold formed a swing low and managed to close above the 50 day MA to initially signal a new daily cycle. Since then, gold has lost the 50 day MA, which calls into question if day 33 was the DCL. And as of Tuesday, gold is threatening to lose the 200 day MA.

Gold needs to close back above the 50 day MA in order to label day 33 as the DCL and for the daily cycle to start to gain some traction. Losing support of the 200 day MA will signal a continuation of the daily cycle decline.

The dollar had a big drop back in August.

Since the big drop in August the dollar has been finding support along the 92.22 level. 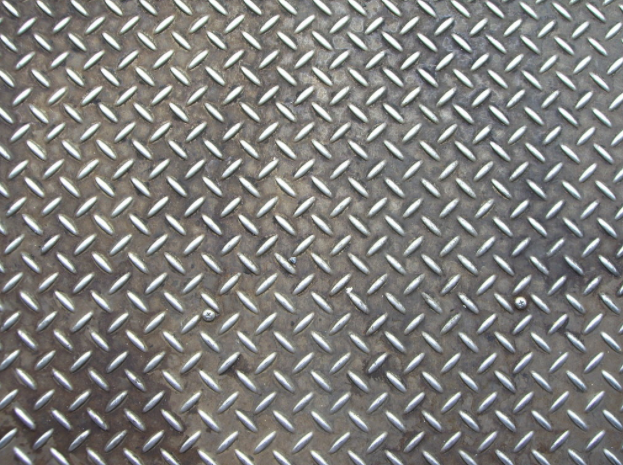 On April 5th we took a look at steel 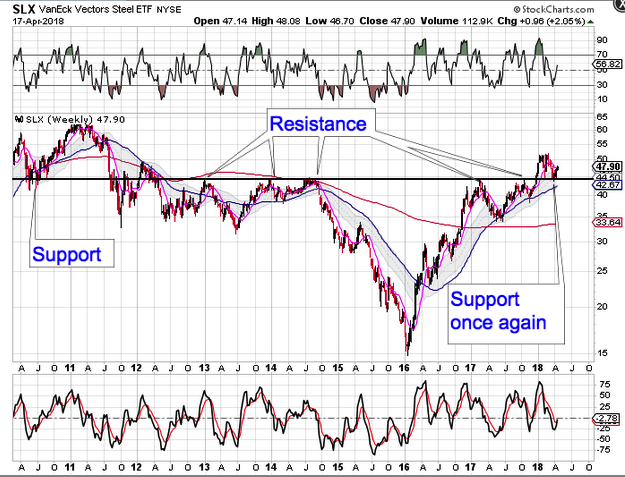 We looked at the long term chart for steel and discussed how the 44 level had been support for steel prior to 2012 but then acted as resistance for the following 5 years. 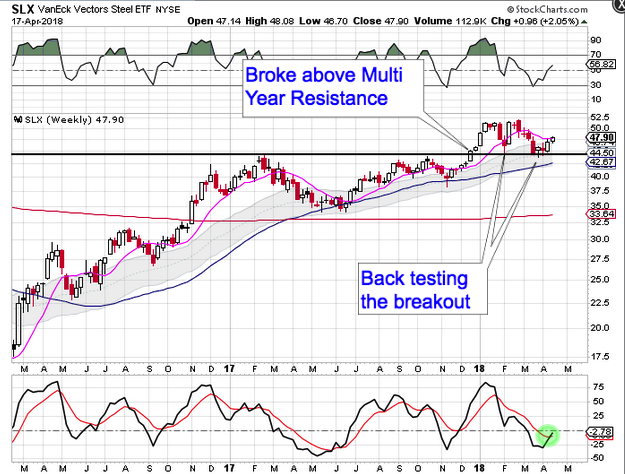 Steel broke above the 44 resistance level late 2017. Steel back tested the 44 level as it declined into the February DCL. The after breaking out to a new multi year high in February, steel proceeded to back test the 44 level again as steel declined into its yearly cycle low. 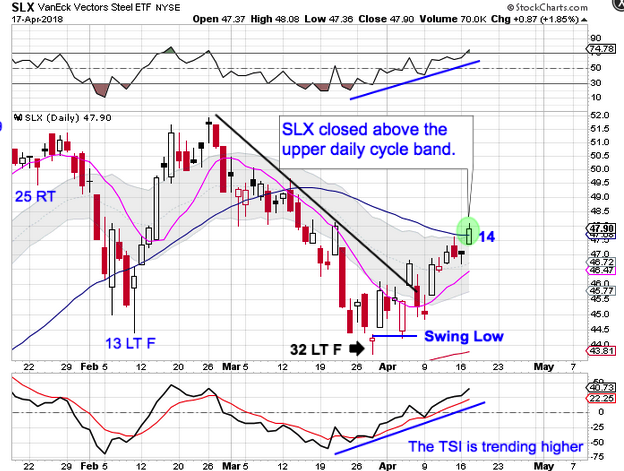 In summary:
* Appears to have printed its yearly cycle low.
* Steel has successfully back tested the multi year support/resistance level.
* Steel is beginning a new daily uptrend.