The Financials are having a good week.

The Banking Index is breaking convincingly above the 50 week MA.

And the Transports closed on Tuesday at a new all time high.

However they printed a huge bearish candle on Monday followed by forming a swing high on Tuesday. Granted they did get quite stretched above the 10 day MA and brief sell off would allow the 10 day MA to catch up to price. We will need to watch to see if the Semi’s can find support at either the 10 MA or the 50 MA and form a swing low.

We are starting to see failed yearly cycles in the major indices. 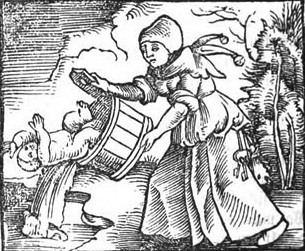 With the Dow Jones down another 1190 points on Thursday and the S&P down another 137 points, it is undeniable that stocks are declining into their yearly cycle lows. 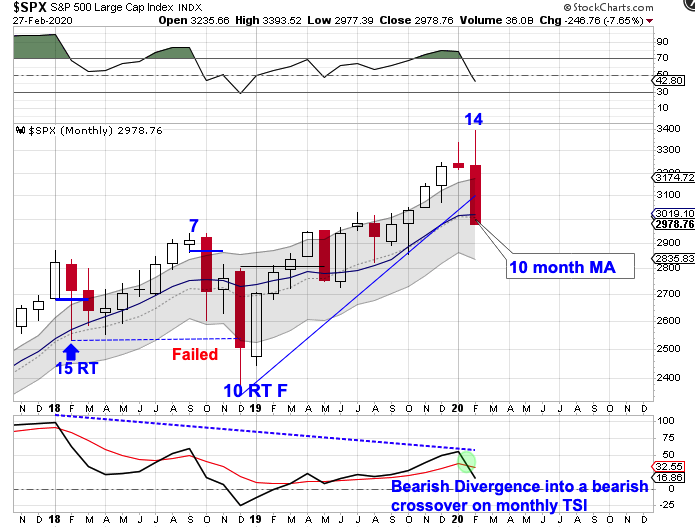 And as stocks are dropping down into their yearly cycle lows, they are taking other sectors right along with them. 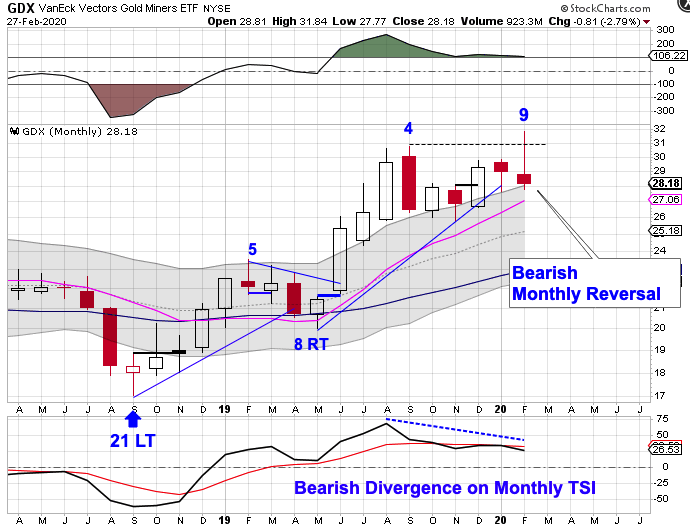 The Miners are also forming a bearish monthly reversal. This is month 9 for the yearly Miner cycle, placing them in their timing band for a yearly cycle low. Like stocks, the Miners formed a higher high in February. Therefore the earliest a monthly swing high can form in March. Then the Miners should go on to close below the 10 month MA in order to complete its yearly cycle decline. 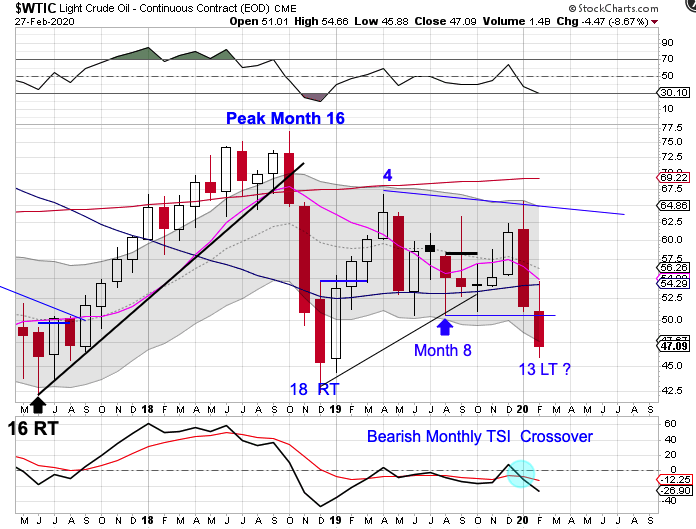 This is month 13 for the yearly oil cycle, placing it in its timing band for a yearly cycle low. Oil was rejected by the converging declining 10 month MA and the 50 month MA and is breaking lower. And with stocks dragging everything down, I do not expect to see oil bottom until stocks print their yearly cycle low. 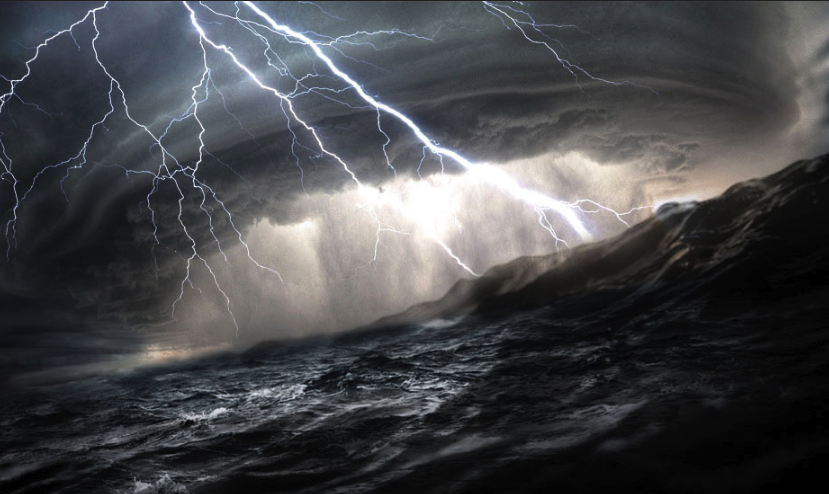 On February 10th and February 16th we discussed how stocks were in their timing band for an intermediate cycle decline. We also discussed the emerging health concern presented by the Coronavirus that was causing massive disruptions that impacted manufacturing worldwide. It seems that these concerns finally came together to form the Perfect Storm. 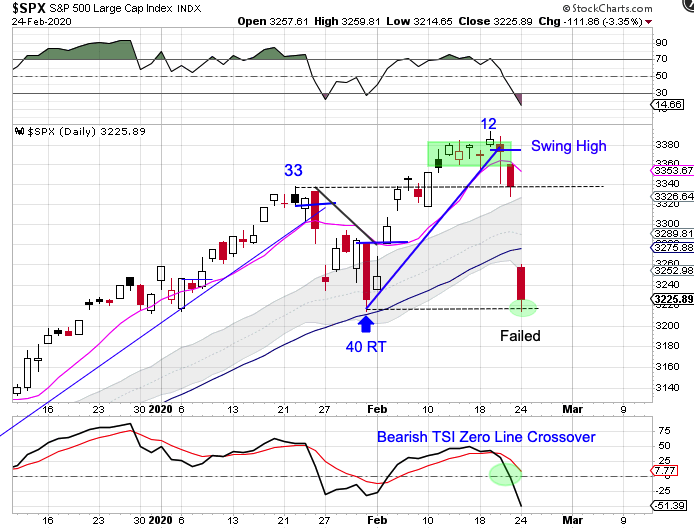 The Dow Jones Industrial dropped over 1000 points on Monday. The S&P was down over 120 points. Both indices broke below their previous daily cycle low to form a failed daily cycle. Over the past 2 years (14 daily cycles) stocks averaged 39.54 days per daily cycle. Monday was only day 15 for the daily equity cycle. If stocks run their average cycle, then stocks would need over 4 more weeks before printing their daily cycle low.

The Fed will certainly try to rescue the market so I think that we will likely see a bounce at some point. The earliest that stocks printed a daily cycle low over the past 2 years was 23 days. So until stocks get closer to their timing band, any attempt to rescues the market may not gain any traction. 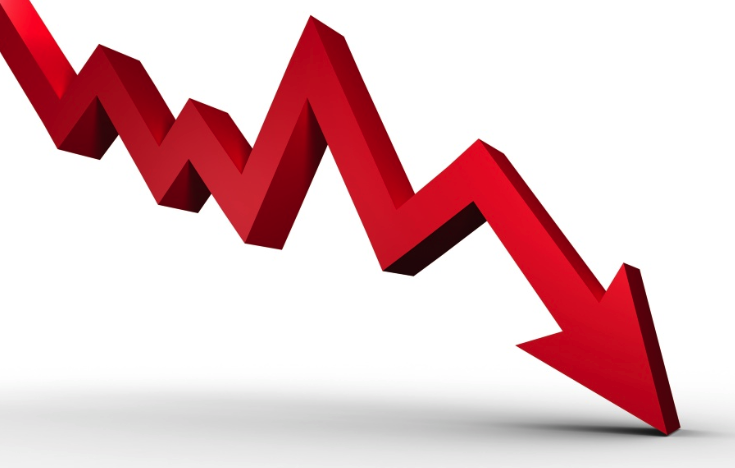 The Transports, the Banks, the Nasdaq and the Russell all printed lower lows on Thursday. 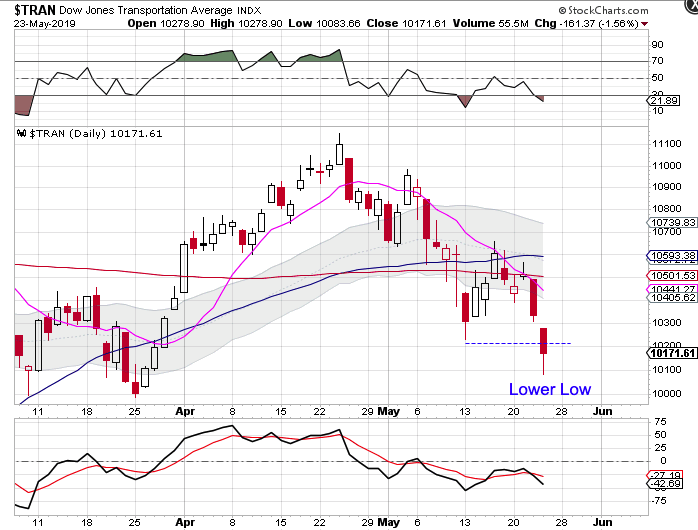 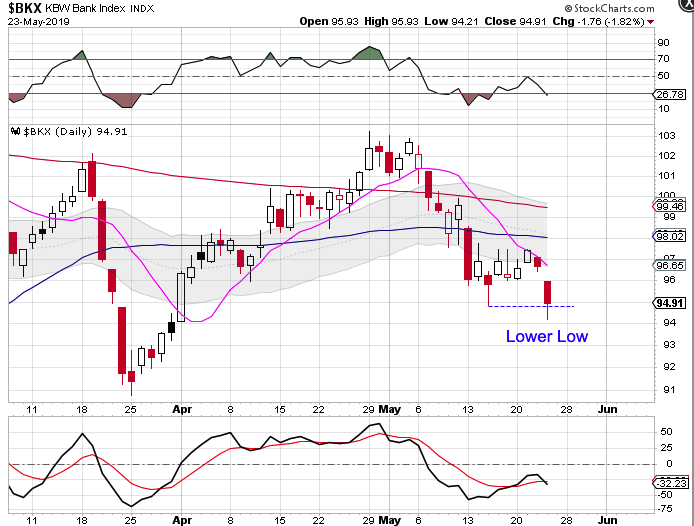 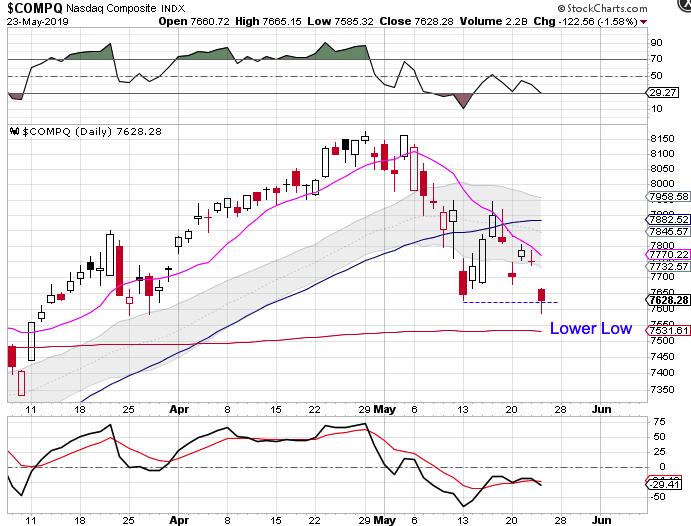 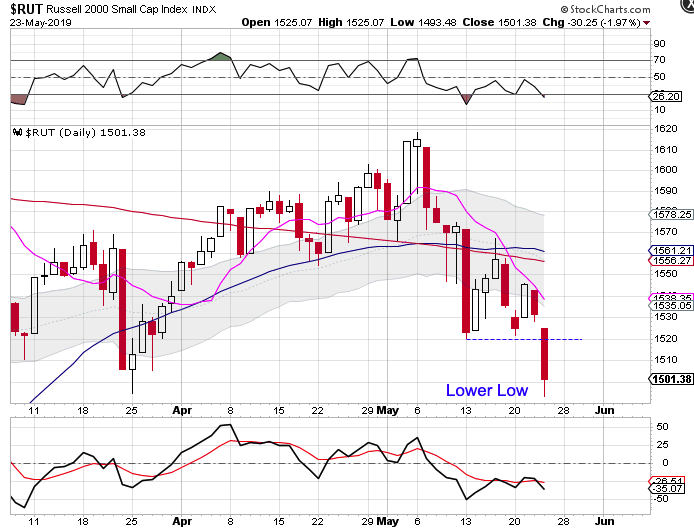 However the S&P did not print a lower low. 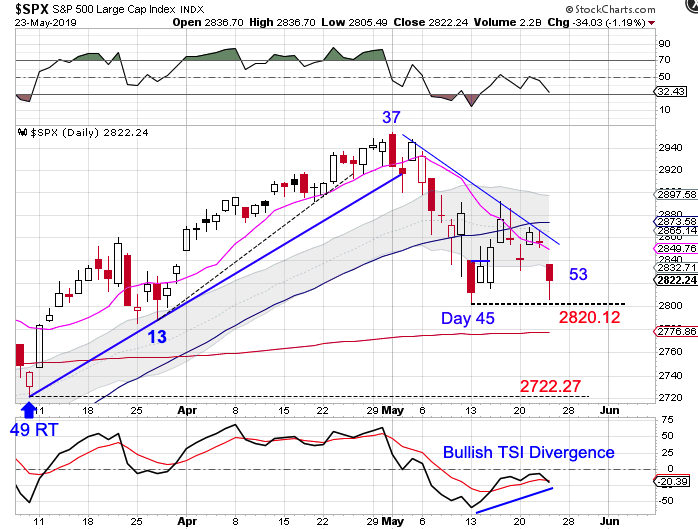 Stocks printed their lowest point on day 45, placing them in their timing band for a daily cycle low. Stocks did form a swing low and managed to close above the 50 day MA to signal a new daily cycle. However, stocks have not been able to break above the declining trend line to confirm a new daily cycle. That makes Thursday day 53 for the daily equity cycle.

A daily cycle low is defined as the lowest point following the cycle peak. Since the other indices and sectors formed lower lows, I expect that stocks will too. Stocks should break below the day 45 low in order to complete its daily cycle decline. Once that happens the formation of a daily swing low will have good odds of marking the daily cycle low. 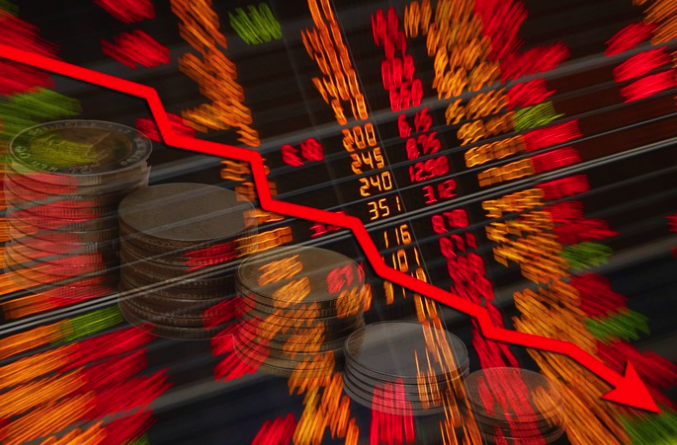 Both the S&P and the Nasdaq printed an extended 52 day daily cycle low on 10/29/18. They both formed swing lows on 10/31 to signal a new daily cycle. Both went on to close above the 200 day MA on day 7, managing to turn the 10 day MA higher to confirm the new daily cycle. Then they broke lower. 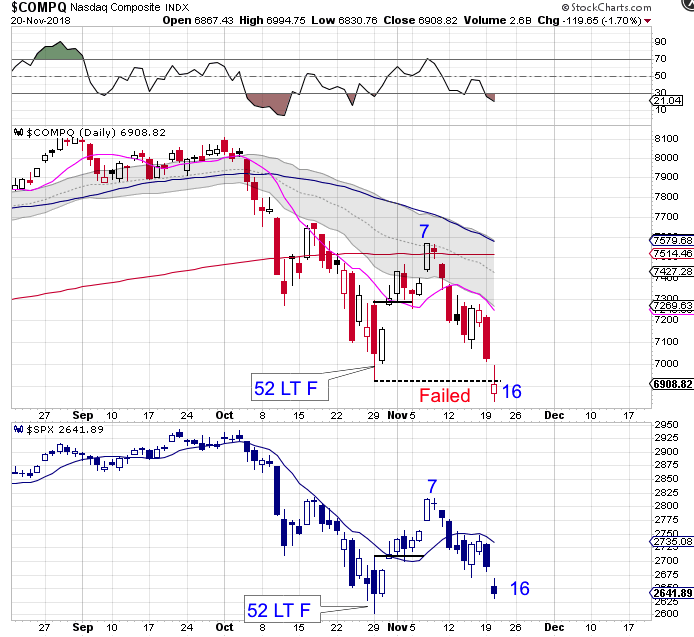 The Nasdaq broke below the previous daily cycle low on Tuesday to form a failed daily cycle. It also extends the intermediate cycle decline, which I plan detail in the Weekend Report.

While the S&P also broke lower they have not yet formed a failed daily cycle. But since the Nasdaq had been leading the indices higher, it will likely also lead them lower. Therefore, I suspect we will see the S&P also form a failed daily cycle to extend their intermediate cycle decline. Since Tuesday was only day 16 for the daily equity cycle. That leaves about 3 more weeks for stocks before they enter their timing band to print a daily cycle low.

Look for the Likesmoney Black Friday Sale for New Subscribers

This special Black Friday Sale will be available on Friday, 11/23/18 only.

All 3 are getting late in their timing bands for a daily cycle low. Both the Russell and the transports have delivered a recognizable correction while the S&P has only formed a swing high. If there has been a change in character, as we discussed here, then we may not see much in the way of a correction for the S&P. However, all three remain in a daily uptrend. So if a swing low forms above the lower daily cycle band the correction strategy is to buy the dip. That is because once an asset is in a daily uptrend, they will remain so until they close below the lower daily cycle band.

XLE peaked on day 27 and has since been slowly working its way into its daily cycle low. A peak on day 27 assures us of a right translated daily cycle formation. XLE printed its lowest point on Thursday, following the day 27 peak. That places XLE deep in its timing band for a DCL. At this point a swing low and close back above the 10 day MA will confirm a new daily cycle. XLE has begun a new daily uptend. It will continue in its uptrend until it closes below the lower daily cycle band.

The S&P and the NASDAQ both broke below their previous daily cycle lows today, producing failed daily cycles. They join the Russell, which failed in late September.

A failed daily cycle leads to an intermediate cycle decline.

The current intermediate equity cycle peaked on week 6. A weekly swing high formed on week 7 and a trend line break occurred in week 8. There was a clear and convincing bearish follow through last week. Today saw stocks break below the 50 week MA. Stocks also broke below the previous weekly low today confirming a yearly cycle decline. With the weekly cycle count at 10 weeks there is time for one to two more failed daily cycles before an intermediate cycle low is due.

However, the Buying on Weakness numbers have me wondering if something more significant is occurring.

There has been over 2.23 Billion Buying on Weakness since this daily cycle peaked on September 19th. I commented last week that we were seeing the type of BOW numbers usually seen at intermediate cycle lows. With today’s BOW of 500 million I decided to check.

There was 1.48 billion in Buying on Weakness that printed going into the August intermediate cycle low. So already the BOW numbers for this decline has surpassed the the decline into the previous intermediate low by over 50%, which is significant. So I decided to compare the BOW numbers to the last yearly cycle decline.

The last yearly cycle decline occurred in June, 2012. The BOW numbers that printed as stocks declined into that yearly low was 1.12 billion.

Until proven otherwise, our frame of reference has equites entering their yearly cycle decline. The first to begin is the NASDAQ.

The S&P just left behind a right translated daily cycle 10 days ago. Our normal cyclical expectation is to see a higher high print following a right translated cycle. Sometimes there is an exception if stocks are rolling over into an intermediate low, which is what I think is happening.

And the Selling on Strength numbers seem to agree with this view.

The previous daily cycle formed as a right translated daily cycle. Last week saw stocks break out to new highs, fulfilling our cyclical expectations. However, stocks ended the week on a bearish note.

The NASDAQ had both occur on Friday.

While the S&P dropped 1.25% the NAS tanked for a whopping 2.6%. In the process the NAS delivered a bearish TSI zero line crossover and printed a failed daily cycle. It appears that the NAS is leading the way lower.

So far the weekly S&P is holding up printing another higher high last week. However there is a bearish divergence that has been developing on the weekly TSI.

And as shown below, these bearish divergences on the weekly chart normally precede a correction.